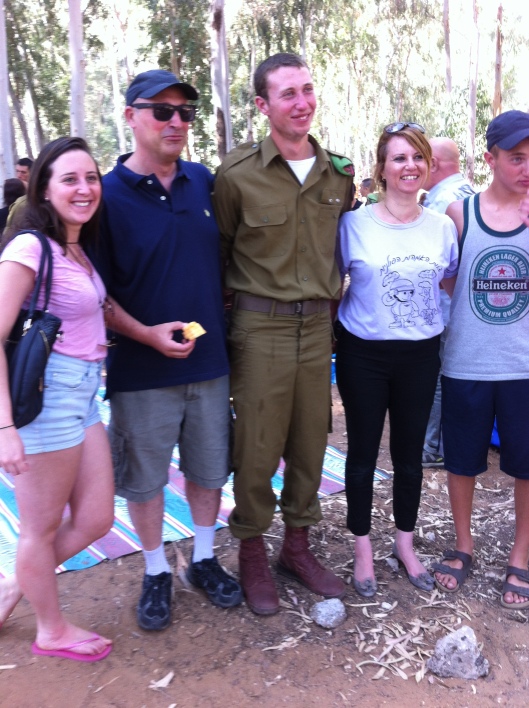 In Israel it is a matter of routine for the majority of the population that when one’s child, whether boy or girl, reaches the age of eighteen they go into one of the forces that make up the IDF in order to give two or three years of service to the country.

I have now reached a stage in life where it is my grandchildren who are being called to serve their country, and while it is a source of pride, I find that various kinds of emotions are involved.

So it was with mixed feelings that this week I attended the passing out ceremony of my eldest grandson, Gil. Looking at his impressive six-foot frame now, it is with a slight pang that I remember him as a toddler who always had a healthy appetite, grew at a rapid pace, played football and basketball with his friends, and was not a great one for talking. In fact, in common with many of his generation, he seemed to develop a special way of talking and unique vocabulary that made it difficult to understand him even when he did speak.

Like many of his friends, on completing high school Gil was eager to join a combat unit. Not for them the life of the backroom boys who sit before computer monitors or in offices. These boys are only too eager to launch themselves into military training of the most rigorous kind, testing their ability to endure hardship and prove their mettle.

The passing out parade that I attended, together with the families of the other soliders, was held in a grassy area surrounded by woodland. At the centre was a memorial for soldiers from the force who had fallen in battle, fronted by a relatively small parade ground. As is the custom at such events, the parade was preceded by a meeting between the families and the soldiers who had just completed one and a half years of training. Each family had come laden with food and drink for the young men, who fell eagerly upon the feast set out on tables among the trees. The mothers of the soldiers in Gil’s unit have organized themselves into a group which is in constant contact with one another through the WhatsApp application. This means that throughout the training period they shared information, even arranged a get-together at one stage, and serve as a support group for one another.

Another Israeli tradition on such occasions is to have special shirts printed denoting the family’s pride in their offspring. This had also been coordinated by the mothers of Gil’s unit, and each mother had a pale mauve T-shirt with a cartoon of a soldier saluting a mother on the front and a slogan which said (roughly translated from Hebrew): ‘OK, YOU’RE A FIGHTER BUT YOU’RE STILL MY SON,’ and her son’s name on the back. It was a sight to see. The mothers had also ordered special cakes with custom-made icing in the force’s colours, decorated with army boots and insignia made out of sugar. Another amazing sight! 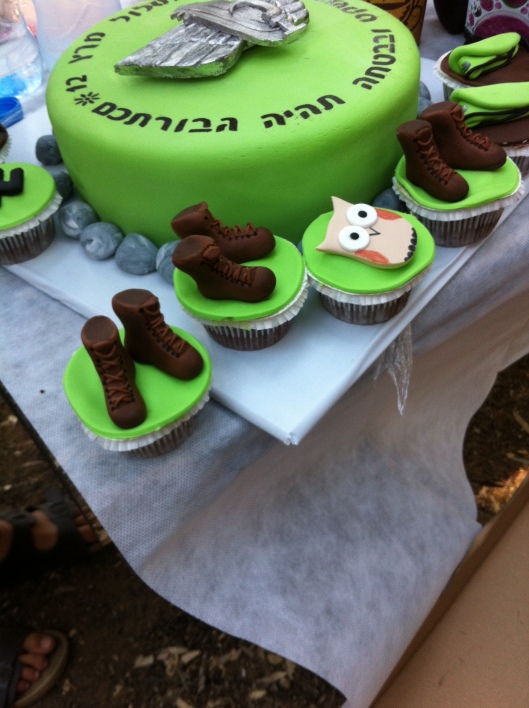 After a relatively brief passing out ceremony and speeches by officers, the families were treated to a film showing some of the training that the soldiers had been undergoing in the preceding eighteen months. It was at that moment that I felt like passing out myself (in the other sense of the phrase). Those boys underwent training of the most strenuous and demanding kind. Not everyone who began the course had the strength and stamina to complete it. At the end of the film it was clear that not only had they been toughened up and were no longer boys but men, but also they had developed a special bond, forging them into a band of brothers, each one of whom would be prepared to lay down his life for the others.

And so, after a brief respite, the real work of being a serving soldier begins for Gil and the other members of his special crack unit. This means that for the next eighteen months Gil will see less of his family, and the family will make sure to tune into every news broadcast, each member keeping its eyes and ears open for information about the political and military situation, knowing that Gil and his companions are on the front line and that their lives may well be in danger at any given moment. Our emotions are a combination of pride and fear. We’re keeping our fingers crossed and hoping for some peace in the region.

2 thoughts on “Passing Out”