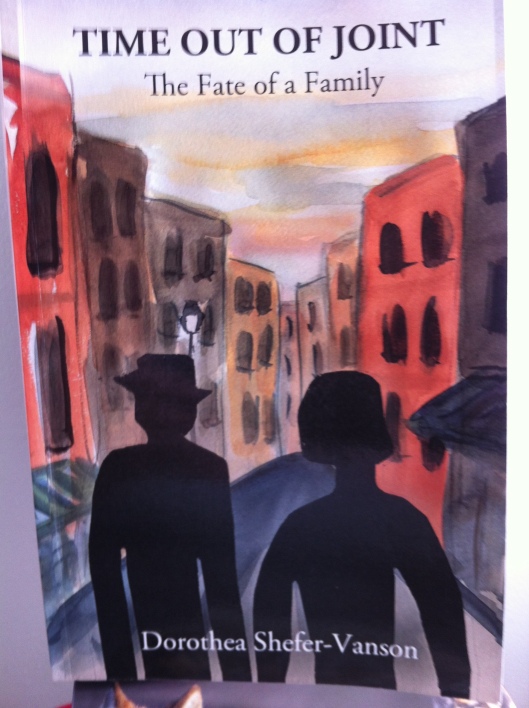 “The time is out of joint. O cursed spite

That ever I was born to set it right.”

Hamlet expresses so succinctly and poetically what many of us feel as members of the Second Generation when we think about the rise of Nazism, the Second World War and the conflagration that encompassed most of the world in the middle of the twentieth century.

The signs were there for those who were prepared to read them. These included Winston Churchill amongst others, and my father’s cousin, who refused to return to her home in Germany from a skiing holiday in Switzerland when she heard that Hitler had been elected to the Reichstag. She sent her husband home to pack up their house, and they eventually made their home in the USA.

Unfortunately, my father and his parents were not so prescient, and by the time they realised that it would be advisable to get out of Germany the doors of most countries were closed to them. I know that they tried to get out. I have the letters that prove it. It’s a banal story, and one experienced by so many others, but in this particular case there is a happier ending, although not an entirely happy one. Otherwise I wouldn’t be here writing this, would I?

After Kristallnacht, the Pogrom Night of 9th November 1938, when the well-planned and coordinated destruction of synagogues and the widespread arrest of Jewish men all over Germany was carried out by the S.S. and its supporters, my grandmother sent a cable from Hamburg to her relatives in London with just three words: ‘Save my son.’

It had the desired effect, and the relatives set about arranging for my father, then a young man of twenty-two, to gain entry into England, in the hope that he would be able to find work and eventually bring his mother over. He got out but was unable to bring his mother out, and she perished eventually in Theresienstadt.

There were stringent restrictions on what Jews leaving Germany were allowed to take with them, and these included valuables and money of any kind other than the sum of ten marks. Into the one suitcase permitted to my father my grandmother put the things that she probably thought would serve as a reminder of his home: files of family documents and correspondence, photograph albums and the piano music her husband used to play. I sometimes wonder whether she knew that she was creating a treasure trove for her future granddaughter, i.e., me.

Those objects remained in my father’s possession, tucked away in a filing cabinet in my parents’ house, first in London and later in Jerusalem. When my father retired from his job in England he and my mother came to live in Israel, to join me and my two sisters, all of us married and with children.

While helping my parents settle into their new home I came across the files of letters and the other material. My father told me what they were and my curiosity was aroused. I was unable to read German at the time, so enlisted the help of a friend to translate the letters my father’s brother had written from Kentucky in 1928 to his family in Hamburg describing his experiences as an apprentice in a tobacco firm. My uncle died tragically in Shanghai in 1929, and the book of his letters in English that we published in 2003 was entitled ‘The Tobacco Road; Hamburg, Kentucky, Shanghai.’ It serves as a memorial to a talented young man who came to an untimely end (I will gladly send anyone interested a copy).

The letters my grandmother wrote to my father and his sister also serve as a monument, this time to the fortitude and faith of an elderly woman left to cope on her own with the venality of the Nazi regime. A book containing her letters and describing developments as they affected the Jewish community of Hamburg in those years was published in German by the Hamburg state authorities in 2005.

But the fate of my father’s family continued to haunt me. The letters in the files contained many fascinating accounts of what it was like to be living in Germany and other parts of Europe in those fateful years. I decided to study German, found a private teacher and eventually was able to read and understand the correspondence and documents. It seemed to me that each of the individuals I had never met had a distinctive voice and character, and should not be permitted to sink unacknowledged into the depths of forgetfulness.

Gradually those people came to life in my mind. Anecdotes and memories my father had told me connected up with the voices in the letters, and after several years in which I heard these people talking to me I decided to put metaphorical pen to paper and tell their story in the only way I knew how – in the form of a novel.

The historical currents sweeping through Europe in that period also played a part in the lives of the individuals I describe, and these have also been incorporated into the novel. I have chosen to begin the story with an account of the funeral rite performed by the members of the Hamburg Hevra Kadisha, the Burial Society, of which my grandparents were both members. I have researched this ritual, and hope I have not done too great an injustice to a Jewish tradition that has endured for thousands of years.

The beautiful and rebellious daughter of the family leaves Germany long before Hitler’s rise to power, and goes to live and work abroad, first in Amsterdam and Paris and eventually in the south of France. She and her bohemian friends become involved in the political movements of the time, and her lover is killed fighting in the Spanish Civil War. She eventually finds happiness in the arms of a white Russian émigré in a village in the south of France. Their son, who is my cousin, lives there to this day, and his birth and early childhood at a time when France was under German occupation is also described in the book.

Apart from the conversations and thoughts, which are the product of my imagination, the novel is based almost entirely on factual events, and I have endeavoured to describe how they affected each individual. Thus, we accompany the young man who crosses the Atlantic by liner to spend a year in Kentucky in order to learn about the tobacco trade. A year later, flushed with success, he returns to his family in Hamburg, on his way to his next assignment. After travelling by train and boat across Europe and Russia, he reaches Shanghai, where he comes to a tragic end.

Some years later the father of the family is struck by a neighbour who complains of the noise made by his musical evenings. The father sues him in the Hamburg civil court, demanding an apology; although his claim is upheld, he dies soon afterwards. The youngest child, by now a young man, is saved by his widowed mother’s intervention on his behalf after Kristallnacht.  But the mother herself is unable to leave Germany and is sent to her death in a concentration camp. This, too, is described, based on her letters as well as on considerable research.

The conclusion of the book takes place in London, in a hostel for Jewish children who were able to leave Germany under the Kindertransport scheme, The life of one such child and one such hostel is depicted in considerable detail. This, too, is based on the personal experiences of my parents.

A brief epilogue set in 1992 describes what became of the two babies born in 1940 and 1942, one in France (my cousin) and the other in England (me), to two of the principal characters, as well as the fate of the troubled young boy who is one of the residents of the hostel.