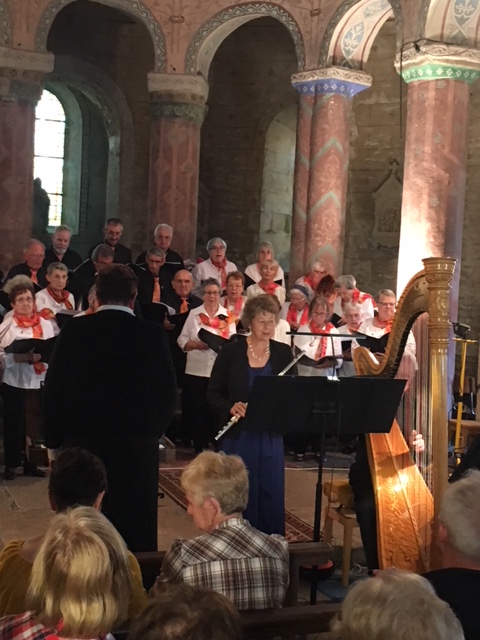 Summer in the depths of rural France is peaceful in the extreme, providing R&R (rest and relaxation) and constituting balm for the soul.

One does one’s best to take advantage of the quiet time, and even to enjoy the food and wine while endeavouring to maintain a modicum of moderation. This, of course, is particularly hard given the many temptations that surround one on all sides.

Cultural delights such as those we are able to enjoy in the city are rare, however, and one doesn’t expect to encounter first-class entertainment of that kind while in the countryside of any country, and certainly not in France, far away from any centre of any kind.

However, we were able one evening to enjoy music-making on a high standard in a church in one of the nearby villages. An ensemble consisting of a flautist and harp-player, both originally from the Netherlands, entertained the packed hall with a selection of classical music ranging from Bach to very modern pieces, in some cases written especially for these artists. The musicians, who also teach in Dutch music academies, are both members of the Netherlands Philharmonic Orchestra.

In between the two parts of the concert (which started at the very sensible hour of 6 p.m., leaving time to get home in time for dinner) we were entertained by the local choir of some forty adults, presenting a very eclectic programme of songs sung in a variety of languages. This took us far from the provincial and rural France we have come to know and love, with harmonious arrangements of French folk songs, the orthodox Serbian liturgy, a rendition in French of ‘Let the Sun Shine in,’ from the musical ‘Hair,’ and also of ‘Amazing Grace,’ as well as of Handel’s ‘Lascia ch’io pianga’ and ‘Erlaube mir’ by Brahms. The grand finale, in which the choir was accompanied by the flute and harp ensemble, was Verdi’s ‘Va Pensiero,’ the chorus of the Hebrew slaves from ‘Nabucco.’

The choir seemed to consist mainly of elderly and middle-aged individuals drawn from the various local communities of the region. What was surprising was its particularly strong male section, which added considerably to the quality of the sound as it resonated around the tiny church. The enthusiasm of the lady conductor was also admirable, though I was somewhat distracted by wondering whether the sleeves of her jacket would withstand the strain of her energetic arm movements.

The audience also displayed considerable enthusiasm, and seemed reluctant to let either the players or the choir end the evening without a series of encores of various kinds. However, sitting on hard wooden benches for two hours was starting to get too much for us, so that we felt impelled to leave before the choir embarked on a repeat performance of ‘Va Pensiero.’ It was also becoming apparent that the choristers were also beginning to get tired, having had to stand for most of the evening.

After all, they must have wanted to go home and have dinner, too. They certainly deserved it.