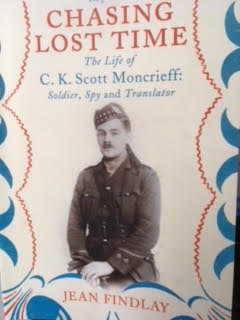 The book was written by Jean Findlay, a distant relative of the subject, and was published by Chatto and Windus in 2014

As a former translator and great admirer of the works of Proust, both in the original French (a bit of a struggle for me) and in their delightful English version, I could not resist ordering this book from the Bibliophile company that offers hundreds of books at reduced prices.

My expectations were not dashed, and I thoroughly enjoyed reading this well-written account of the unusual character and life of Charles Kenneth Scott Moncreiff (CKSM, or CK as he was known to his friends), from his beginnings as the scion of a somewhat eccentric Scottish family to his later life as an itinerant intellectual, literary luminary and intelligence gatherer in Italy.

His mother, to whom he was very attached, was something of a society beauty but also an artist and a professional writer, publishing essays, articles and stories in a variety of journals and newspapers. His father was a lawyer, eventually becoming a judge, so that his employment in various capacities meant that the family had to move several times in CKSM’s childhood and youth, though always remaining in some part of Scotland.

Much of the book describes CKSM’s education, first in a Scottish private school and then at Winchester public school, having been awarded a scholarship. There he developed his love for poetry and literature in general, made lifelong friendships, and presumably developed the homosexuality that formed an integral part of his adult life. Having failed to get into Cambridge, he went up to Edinburgh university, first graduating in law in order to satisfy his parents, and then following his own inclination by studying literature.

Born in 1889, Charles belonged to the generation of young men who fought in the First World War. Having been an enthusiastic member of the cadets, he became an officer in a regiment of the Kings Own Scottish Borderers, and spent the war years fighting in France interspersed with periods of being sent home to recover from the disease known as Trench Fever, which afflicted him at various periods throughout his life. He relished the life of the soldier, displaying fearless fighting spirit and loyalty to his men, but eventually suffered a serious wound to his right leg that left him disabled for the rest of his life and caused him to endure several bouts of hospitalization for surgery in an attempt to save the leg from amputation. During the war, and possibly as a result of his experiences in it, he converted to Catholicism.

Inevitably, he was affected by the death in war of many of his friends and fellow-soldiers, particularly that of the poet Wilfred Owen, whom he admired tremendously and to whom he was particularly devoted. In civilian life he held positions in London in the War Office and in the offices of The Times, which was owned at the time by Lord Northcliffe (Alfred Harmsworth).

Before the war CKSM had translated the ancient texts of Beowulf and Chanson de Roland, and it was while he was working at The Times that he began translating the first volume of Proust’s epic novel, A La Recherche du Temps Perdu. His method consisted of reading a sentence, then translating it viva voce to a friend, and subsequently writing it down. To this particular translator this seems an impossible undertaking, but this was CKSM’s preferred modus operandi, and seems to have worked exceedingly well, as his translations of all the volumes that comprise the novel, as well as those of many other authors (Pirandello, Balzac, Stendhal, inter alia), are acclaimed as works of great beauty and profound understanding.

He spent most of his later life in Italy, living in a succession of rented rooms in Pisa, Venice, Rome, to name but a few, while undertaking intelligence work for Britain and also entertaining a wide assortment of literary figures from England and elsewhere. He also worked simultaneously as a literary critic, writing for various London journals, as well as conducting an extensive correspondence with many of his friends and colleagues.

He died in Rome in 1930, aged only forty, after being diagnosed with stomach cancer just eight weeks earlier, but having lived almost twice as long as those friends who had been killed in the war. He seems to have managed to enjoy his somewhat diversified life-style while at the same time working hard, combating disability, maintaining a wide range of relationships, and sending money to help support the families of his two older brothers who had died before him.