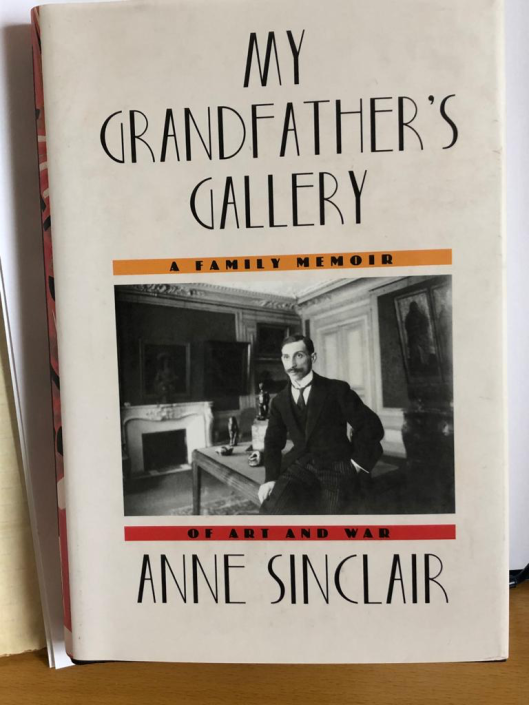 Based on extensive research, the author describes what happened to the Paris art gallery that her grandfather, Paul Rosenberg, owned and directed in the first part of the twentieth century, until the invasion and occupation of France by the Germans in 1940. When France was taken over by the Germans all Jews, including the Rosenbergs, were deprived of their citizenship and property. In its heyday the Rosenberg Gallery exhibited the works of painters such as Matisse, Braque, Picasso and others, with whom Paul Rosenberg maintained warm relations and in some cases, especially that of Picasso, a close friendship. Many of these artists were defined as ‘degenrate’ by the Nazis, although that did not prevent them from using these works for their own ends, often selling them to museums and collectors who paid handsomely for them.

The imposing building at 21 Rue la Boétie which housed the gallery is still standing, and Anne Sinclair describes with pride the moment when she was honoured with the task of unveiling the white marble plaque on the façade of the building commemorating her grandfather and the artists with whom he had been associated. The plaque was the initiative of the present owner of the building, a certain M. Thélot, who had come across the author’s previous book,’21 Rue La Boétie,’ about the gallery and its association with the artists of the time.

While this book presents some material that is to be found in the previous one, it focuses to a greater extent on the character of the author’s grandfather, his relations with the painters he exhibited, and the spoliation and expropriation of his property and the contents of the gallery by the Nazis. On the basis of her research in both private and public archives, Anne Sinclair describes the process by which the Nazis seized works of art. She also names several of the French individuals who aided and abetted them in this process.

Anne Sinclair is pitiless in describing the actions of such individuals as the concierge of the building and the secretary of the art gallery, people whom the Rosenberg family – which lived above the gallery – considered to be friends, in enabling the Nazis to take over the building and seize its concents. What had once been an art gallery became the IEQJ (Institute d’Etude des Questions Juives, Institute for the Study of Jewish Questions), festooned with anti-Semitic posters and slogans and the centre of anti-Jewish propaganda in France. Individuals who had come into contact with the Rosenbergs after they fled from Paris and sought refuge in the vicinity of Bordeaux also participated willingly in the looting of what property—mainly art works—they had managed to take with them.

Ultimately, with the help of Alfred Barr, Paul Rosenberg’s friend and the director of the Museum of Modern Art in New York, the family was able to enter the USA after making their way across Spain to Portugal. They spent the war years in New York, where Anne was born, and Paul managed to establish his gallery there. Once the war was over, however, they returned to France and Paul began his campaign of trying to obtain compensaton and reclaim the property that had been stolen from him. This involved going through courts in France, Germany and Switzerland, and Sinclair assesses that he managed to obtain about sixty of the four hundred valuable paintings that had been in his possession before the war.

In an ironic twist of history, it was Paul’s son, Alexandre Rosenberg, a lieutenant in the Free French army under General Leclerc, who was one of the Resistance members who stopped and liberated the last train of looted art that the Nazis were trying to send to Germany. Alexandre eventually took over the running of the gallery from his father, but for various reasons eventually decided to wind the business down. Many of the paintings recovered by Paul Rosenberg were donated to museums in the USA and France.