The lecture given by David Young at Jerusalem’s AACI (Association of Americans and Canadians in Israel) was entitled ‘Over One Thousand Years of Scandals in the British Royal Family,’ and it attracted a record audience.

David Young, who lives in Israel but is originally from England, has written several historical novels. He had prepared his subject-matter well, posting a time-line of all England’s kings and queens since 1066 up on the lectern and referring frequently to his several pages of notes. After all, who can remember all those dates and sort out all the ramifications of the various affairs and scandals that have beset England’s royal family, or rather families, since the blood-line has been severed several times, over the centuries?

The audience, which consisted of mainly elderly English-speaking persons, some of whom even managed to stay awake during the lecture, as evinced by the chortles which emanated from their mouths whenever Mr. Young imparted another tidbit of salacious information. There’s nothing like a juicy sex scandal to wake up the over-eighties.

Mr. Young had certainly done his homework, and it would seem that scarcely a single British monarch has been entirely blameless when it comes to extra-marital exploits. I suppose that on consideration this is only understandable, since throughout history monarchs were obliged to marry members of other royal families in order to consolidate royal power and political influence, and these need not necessarily have been based on love, or even attraction.

So it was more or less taken for granted that monarchs would have one or more mistresses, and Mr. Young had many amusing anecdotes to recount on this score. Thus, King Charles the Second was known to have two mistresses, one of whom was Catholic. When Nell Gwynn, the other mistress, was confronted by a hostile crowd, she put her head out of the carriage and declared, ‘Kindly desist, gentlemen. I am the Protestant whore.’

In addition to his six wives, Henry the Eighth had several mistresses, one of which was the sister of Anne Boleyn. Mr. Young has written a novel about one of them, Anne of Cleves, whom he describes as Henry’s luckiest wife. This is undoubtedly true, as Henry found her to be fat and ugly, and divorced her shortly after their marriage. However, she was dismissed with a considerable fortune and was able to establish herself as a society hostess, eventually becoming a good friend to the king, known as ‘the king’s sister.’

Queen Victoria’s love for her husband, Prince Albert, was exemplary, and her long and enduring mourning for him is universally recognized as unparalleled in its devotion. However, her close relationship with her Scottish ghillie, John Brown, was considered to have passed the bounds of propriety, to the extent that the satirical journal, Punch, referred to the queen as ‘Mrs. Brown.’ In addition, she was also known to have had a very close relationship with an Indian servant. When she died, she was buried alongside Prince Albert, with a photograph of John Brown in her hand.

In more modern times the Prince of Wales, who was the eldest son of King George the Fifth, was obliged to abdicate from his position as King Edward the Eighth because on becoming king he would have been unable to marry his mistress, Wallis Simpson, an American divorcee. This meant that his younger brother became King George the Sixth, and he in turn was succeeded by his daughter, the current Queen Elizabeth the Second.

It’s interesting to note that the Queen’s grandson, Prince Harry, is currently engaged to an American divorcee, Meghan Markel, and there is no mention of his being unable to remain a prominent member of the royal family.

So it would seem that there have been some changes in the ancient traditions of the British royal family, in keeping with the shift in morals, mores and attitudes in modern British society.

Despite the cold and the rain of the January night, Jerusalem’s principal concert hall, Binyanei HaUma was packed to almost full capacity (over 3,000 seats) for the performance by the world-renowned Israel Philharmonic Orchestra of Gustav Mahler’s seventh symphony, conducted by Dmitri Jurowski.

The programme notes informed us that Mahler was suffering from what could be called ‘composer’s block’ in the summer of 1905, when he retreated to the country to compose, as was his wont, after the rigors of the working year serving as conductor of the Vienna Opera. It was only when boating on a nearby lake that the plash of the oars suddenly gave him the inspiration to compose.

To be quite honest, at last night’s performance I failed to pick up any plash of oars or any watery allusion whatsoever. Mahler’s seventh symphony is generally acknowledged to be more difficult to understand and interpret than his previous ones, and last night’s performance bore this conclusion out, despite some stellar playing by the orchestra’s virtuoso members, almost one hundred of whom sat crowded on the stage.

What most distinguishes this symphony, in my opinion, is the absence of any identifiable, continuous melodic thread. Three of its five movements bears a descriptive heading, such as ‘Night Music’ and Shadlow-like,’ alongside the more mundane Adagio-Allegro of the first movement and Rondo-Finale of the last, but these titles do not really explain what is going on in the music.

From the introductory passage played by the horn to the grand finale, where all the instruments are playing fortissimo, with percussion galore and two (yes, two!) sets of tubular bells all giving of their utmost, the symphony is replete with all the familiar elements that we have come to know and love in Mahler’s other symphonies. And so we hear the familiar rise and fall of the strings, the echoing notes of the woodwinds and brass, the interplay between the various brass instruments, the melodious notes of the two harps, and the inimical sounds of the different kinds of drums. In his childhood Mahler lived close to a military barracks, and the sounds he heard then resound through his music and thus come to our ears, too.

But it’s the absence of any continuous melodic thread that I find most disturbing in this symphony, which nonetheless bears all the hallmarks of Mahler’s music. Snippets of other, more accessible symphonies of his appear and recur throughout the performance, and at times one thinks that one is able to recognize where a theme is going, but then it disappears and a different one emerges. The symphony as a whole seemed to me to be comprised of innumerable component parts of something that could be considered akin to the pieces of the game known as Lego.

On reflection, it seems to me that Mahler took snatches of music he had composed in the past, and wove them into a new fabric, a kaleidoscopic invention based on existing elements and reassembled in a different form. Last night’s performance lasted for almost an hour and a half, and every note, every chord, every passage was unmistakably Mahler. But although the individual parts did not seem quite to cohere into a consistent whole, the eruption of sound at the end drew a roar of appreciation and applause from the audience. And so we went out into the cold, wet night warmed and uplifted by Mahler’s inimitable genius. 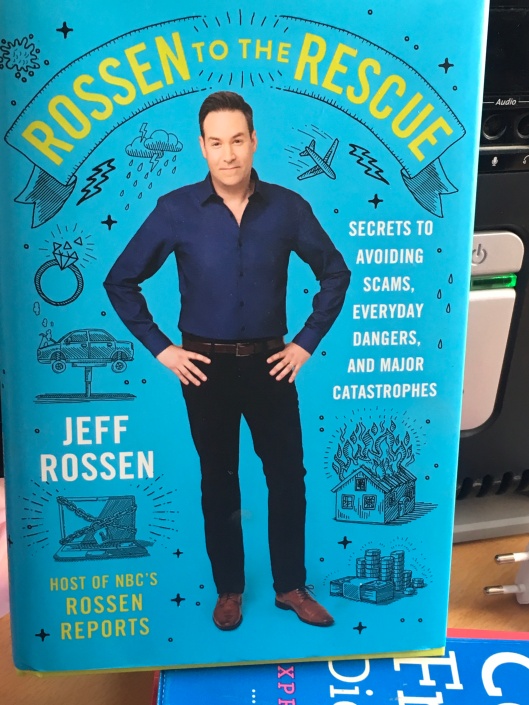 How can you make sure that neither you nor your near and dear ones are subjected to any of the natural and man-made disasters that seem to lurk around every corner? Several of the many pitfalls that await the average man or woman in the modern world are tackled in this book, whose author is apparently a well-known television personality in the USA and host of an investigative program designed to ferret out and tackle such issues.

So this book, which is also plugged as ‘The Essential Guide to Keeping You and Your Famile Safe in the Modern World, is the result, or summary, of his and his team’s efforts to take the sting out of many of the dangers that are now almost an inevitable part of daily life for many of us. Thus, for example, his first chapter focuses on protecting the home, whether from burglars, mold or fire, amongst other things. His principal piece of advice is to be prepared and have a plan for every contingency that might arise. Being a TV personality and having a producer and a team of assistants ready to cooperate in setting up hypothetical situations and consult experts in each field is obviously a help, but it results in invaluable information and advice for those of us who are not so well endowed with outside assistance.

The bottom line varies in each instance. So in the case of a burglary, for example, Rossen’s advice, based on interviews with law-enforcement officials, is to cooperate. “If they ask where your jewelry is, you tell them. You can always get more cash or sapphires, you can never get a new heartbeat.”  When it comes to mold, of course, your course of action is to call in an expert, know where to look for hidden caches of the dreaded infestation, and invest in good cleaning materials (and a good cleaner, too, I might add).

Tips on how to behave if your house catches fire or you are caught in an air-crash or a tornado abound. In the case of a fire, his advice (again, based on the advice of experts) is to leave the place immediately without hanging around to save any items, whether essential or not. If there’s a tornado in the offing you won’t have much time to think about what to do, but Rossen is advised by an expert that the best place to be is in a bath-tub. I’m not so sure about this, as when I was living in the Mid-West of the USA my children were told at school to go down to the basement and sit with their backs to a supporting wall. What protection a bath-tub would provide is not made clear in Rossen’s book, and I have the feeling that he got something wrong somewhere along the way. But since he writes about all the various horrible things that can happen to us in a way that is both entertaining and enlightening, it doesn’t seem fair to quibble.

In addition, over the years of preparing his TV programs Rossen has undertaken a great deal of research, exposing himself to dangers of various kinds, and is now prepared to share his experience and knowledge with the wider public. His book is obviously geared toward the American public, and deals with topics that are more likely to affect people there, but many of the subjects he tackles are certainly universal. Like most countries, America has laws designed to protect the consumer from scams of various kinds, and it transpires that all over the world there are unscrupulous people whose sole aim in life is to steal from, cheat, swindle, or otherwise harm innocent members of the general public. Jeff Rossen has made it his mission in life to protect us from those would-be crooks, and I for one am grateful to him for sharing this information with the rest of us.